To Hell and Back, Pt.2: Roller Coaster

This is a special post for me and a landmark post for this blog. Why? Well, because the poorly shot, badly lit, crappy video you see below is my first video uploaded to YouTube!

In the past year I've been forced to endure several "theme" parks and general amusement parks. I hate the theme parks, but the non-franchise amusement parks are not so bad. On the second day of last week's family trip we went to a small but rather well-thought out park, Kijima Amusement Park, in Beppu, Oita Prefecture. I've become something of a roller coaster fan recently, and the clip below shows the Super LS Coaster in action. I enjoyed several spins on this little coaster!

For me, though, the highlight of the trip was the ride I took on a beautiful, old-school wooden coaster called Jupiter. Of course with wooden coasters you don't have any of the gravity-defying loops and rolls ("inversions" in coaster jargon) that make steel coasters so exciting (and terrifying!). I have to tell you, though, Jupiter was one white-knuckle ride into terror! This was my first time on a wooden coaster, and I'll never forget it. This ride was absolutely bone-jarring! At every moment, through every rise, drop, and curve, I was convinced I was about to die. On top of that, it was raining! The wind and rain were battering my face, I was hurtling through space, I was scared shitless! What an experience!

To give you some idea of Jupiter's size and construction here are a few pics (click to enlarge). It's too bad that it was cloudy and rainy. These photos don't really do justice to Jupiter. 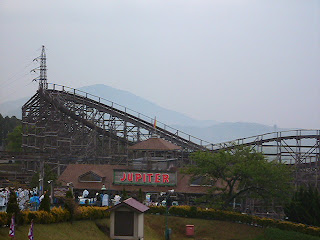 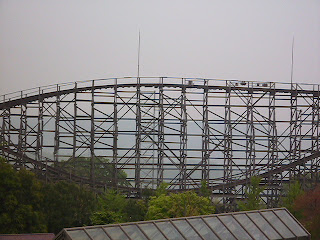 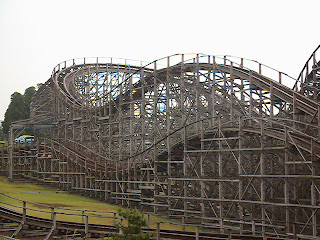 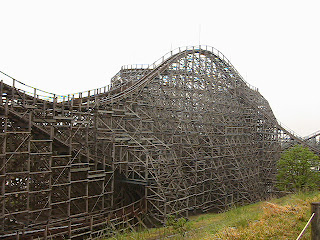 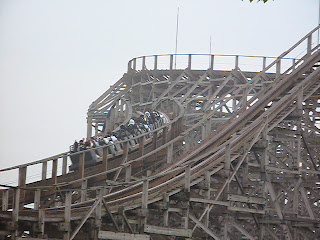