Are We Not Men?

[NOTE: This story originally appeared here.]
"Get that thumb out of your mouth right now, Joey," his mother is scolding him. "You're almost five, it's time you grew up." He liked sucking his thumb. It felt good. Eventually, though, he stopped.

-----
He's in the principal's office. He's in trouble. "Joey, Nancy says you stuck gum in her hair and that several times you've punched her on the shoulder. Is this true?" "Yes, sir." "Well, son," the principal says, "that kind of childish behavior is unacceptable. You'll be going to junior high next year, so I think it's about time you grew up and started acting like a man." "Yes, sir, I'll try."

-----
He has a black eye. His father is looking at him with a strange mixture of pity and disgust on his face. "For Christ's sake, Joe, you mean you didn't fight back?" "No, I didn't, Dad," he replies. His father thunders, "listen up, boy. No son of mine is going to be the high school punching bag. If you're going to be a man, you have to grow up and learn to fight like a man. You got that?" "Sure, Dad."

-----
He's in court. He's in trouble. A few weeks ago he got drunk and took a baseball bat to a bunch of cars in a parking lot. He's done stuff like this before. The prosecutor is speaking. "...and so, your honor, we can see a clear pattern of alcohol abuse coupled with violent, anti-social behavior..." Later, after sentencing him to probation and community service, the judge looks right at him and says, "Joseph Ryan Johnson, this is your last chance in this court. It's time to grow up, young man, or the next time I see you you'll be going to prison. Do you understand me?" "Yes, sir. Thank you."

-----
He's standing in the delivery room. His wife has just given birth to a baby boy. He's a father. He's overcome with joy, but later, as he's standing outside smoking a cigarette, his joy is replaced by terror. He's terrified of the responsibility that's just been delivered to him. He's talking out loud to himself. "Jesus H. Christ, Joey-boy, what are you gonna do now, eh? You can't fuck this one up, asshole. No siree. It's time to grow up, boy, and start acting like a man... whatever the fuck that means..."

-----
He walks into the living room and sees his four-year-old boy on the sofa watching TV. The boy is sucking his thumb. A reprimand springs to his lips, but he stifles it. He pauses for a moment, and then joins his son on the sofa.

"Spiderman. But it's finished."

"You know how me and Mommy are always buggin' you about sucking your thumb?"

"I want to tell you a secret. When I was a little boy I sucked my thumb, too." 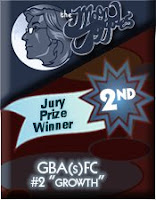 Email ThisBlogThis!Share to TwitterShare to FacebookShare to Pinterest
Labels: Stories