Last week I mentioned that I would be going to the Hell known as Harmony Land, one of the many homes of the nefarious cat-character Kitty-chan, spawn of Satan and purveyor of feline fetishes. Well, I've been, and I'm back.

The good news: The primary goal of pleasing my four-year-old daughter and giving her enough cherished memories to last at least one month was met.

The bad news: Daddy feels like a sucker every time he so much as thinks about the concept of "theme park". Yes I feel like a sucker, and I don't care how many thousands, nay, millions, of happy faces you see grinning back from grainy cell phone photos, Junko with Kitty-chan, Hiro with Mickey, Billy Bob and brood with the T-rex from Jurassic Park, whatever... I don't care about any of that. What idiot in his right mind would be happy, positively fucking gushing with gratitude, to spend a wad of his hard-earned cash, cash that he's likely had had to whore himself out in some way to get, on nothing? No, check that. Here's what you get. You get sunburn from standing two hours in line to get on a ride that you've already paid for; talk about shooting fish in a barrel! You get to be jostled and trampled and generally abused by throngs of "happy" customers, who tend to have a dim view of the fact that you don't seem to be smiling much. What, am I wearing a sign that says "stupid"? I'm actually at the wrong park, right? I wanted the amusement park. I wanted to be amused. I didn't want this manifestation of Hell on Earth. This must be the masochist's theme park, right? And the sheer inanity of it all. How have we been duped into letting ourselves believe this is fun for our children? Who has pulled this con? The average kid's senses are under assault the moment she sets foot into one of these shit holes. Sensory overload--here's everything she thinks she wants, right here, right now. It's just too much. You will never hear more blood-curdling cries of rage and anguish coming from children than you will at one of these places. It's inhuman, I say.

All in all, though, things went about as well as could be expected. I didn't kill anyone, my wife didn't kill me, and my daughter, between fits of impassioned crying and bouts of maniacal laughter, seemed to enjoy herself. Below you'll find some photos I took that pretty much capture what I remember of Harmony Land (click to enlarge, if you really think it's necessary...). 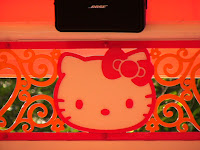 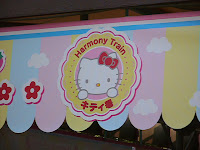 Hello Kitty has a train. 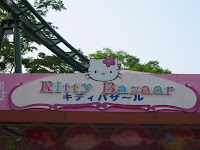 Hello Kitty has a bazaar. 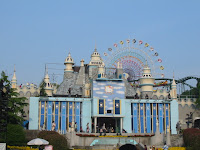 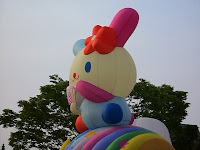 Email ThisBlogThis!Share to TwitterShare to FacebookShare to Pinterest
Labels: Japanese culture, life in Japan, travel, whining (by me)