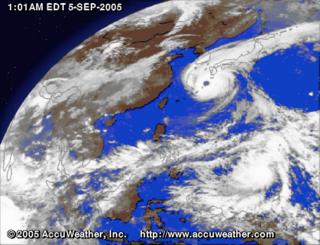 Well, I was scheduled to be flying home for a visit to Canada tomorrow, but there's this big honkin' typhoon parked off the southern coast of Kyushu that seems determined that I postpone my trip at least one day (I'm in Miyazaki, which is about a half an inch northeast of the typhoon's eye in the image on the right). Normally these things blow through in a few hours, but this one seems to be just sitting there taunting me. Typhoon-like conditions began here about 24 hours ago, and it looks like it'll be another 24 hours before we're rid of the damned thing.
Generally I view typhoons in a favorable light. They're always good for a day off work, or cancelling annoying outings that you don't really want to attend. This is the first time in seven years in Japan that I can honestly say I have been inconvenienced by a typhoon.
Posted by Rick at 10:04 PM 2 comments:

"Ground Self-Defense Force troops deployed in Iraq for reconstruction assistance cannot vote in the Sept 11 general election because they do not fulfill the requirements for overseas voting [...]" Apparently, in order to vote in a Japanese election it's not enough to be 'Japanese'. One must either be physically present in Japan or, barring that, be prescient. The following is from the print version of the Daily Yomiuri (Fri, Sept. 2, 2005; not a bad paper, but shitty web presence- in English, at least): "Japanese living overseas have to register in advance to receive an expatriate voting certificate, a process that takes an average of two months to complete." So, any Nihonjin living abroad who did not apply to vote about 6-7 weeks ago can't.
Prime Minister Koizumi dissolved parliament sometime around mid to late August (I can't be bothered checking), and the election campaign itself began this week and will last for two weeks (Americans take note)...
As far as the election itself goes, I suppose I should make some brief comment. The central issue is reform of the post office. Sounds weird, I know. Gwynne Dyer (whether you like him or not) has a pretty good summary of the main facts. The short story: Japan Post is essentially the biggest bank in the world (savings and deposits over $3 trillion); it has 25,000 branches (10 times more than all major banks combined); 85% of Japanese have a savings account at the post office; the post office writes 40% of Japan's insurance policies; as a government institution, it is a cash cow to the perpetually ruling LDP Party, who use it to finance numerous pork barrel projects and secure votes from its 400,000 employees.
The above is certainly troubling, BUT: I frequently read/hear financial commentators refer to the privatization of the Japanese post office as a "freeing up" of funds for "business investment". For me, this only begs the question (to which we all know the answer): why don't the Japanese put their money into banks? The answer is, of course, that the banks are even more corrupt and less secure than the post office. (Smug Canadians might do well to ponder where their savings [if they have any] would be without government protection of the banking system- if a half-dozen member monopolistic entity can be called a 'system'). For most Japanese (and for me) Japan Post is a safe place to keep one's money.
Posted by Rick at 10:50 PM No comments: