Of Men and Mothra... 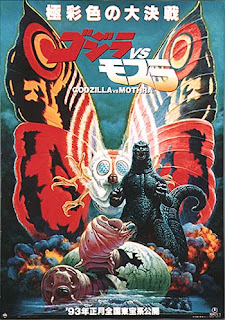 My friends often ask me, "Kyklops, why the fuck do you think about Japanese monsters so much? Why do you draw inspiration from them, and why do they form the basis of your personal outlook on life?" Well, I have no answer for them. And besides, what kind of friend asks a guy questions like that, anyway?

One thing has been gnawing away at me lately, though: what kind of weird shit is it to have a monster that's a fucking giant moth?

General Tachibana: Monsters resembling Godzilla have been seen in the United States...
Soldier one: Wasn't that Godzilla?
Soldier two: The Americans said it was Godzilla, but all the Japanese scientists denied it.