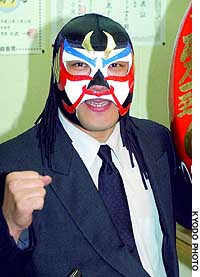 Now what's funny is that the original post is so old that I think every link in the story has gone stale, except the pornographic one. What's weird is that Google is sending people to my site [SFW as long as you don't click to enlarge!] to view the image that I linked to but didn't post in the original story. You've seen this type of page before if you've ever searched for images with Google: "Below is the image in its original context on the page..." But the image was never on my page, just a link! Weird.

The result of all this is that I've been getting a steady flow of page hits for this image that I never posted. I have no idea what the people who arrive here are using for search terms (I suspect something like "gay Sasuke" or "gay Japan", but those are only guesses).

It's at a time like this, dear readers, where I feel duty-bound to renew the pledge I made just a few short months ago:

I, Kyklops, hereby do solemnly swear to my loyal readership that I shall:
--never make gratuitous posts about "Nude Japanese Girls!!!"
--generally refrain from any mention of "Japanese Pornography!!!" (except in the context of stories dealing with "Strange Sexual Habits of the Japanese!!!")
--never write the phrase "Japanese Girls Want Your White Ass!!!"

To this I now add the following: I shall never post "Images of Big Japanese Cocks!!!".
Posted by Rick at 9:54 PM