March 26, 2007 (Miyazaki)--Police are still trying to determine what sparked a disturbance in the downtown area during the wee hours of Sunday morning, amid reports of young women ripping off their clothing and running through the streets crying "Kyklops is teh shit!" The source of the disturbance appears to have been a small downtown bar operated and frequented by some of the less savory foreign elements in Miyazaki, and police have confirmed that on the night in question there was a live performance by a trio of Miyazaki's most notorious gaijin low-life. One of these characters, who is known only by the pseudonym "Kyklops", was placed on Japan's "most wanted" list last year when witnesses reported that he had stepped into a tatami room without first removing his shoes. He faces the death penalty if convicted of these charges, but to date police efforts to bring him into custody have been futile. 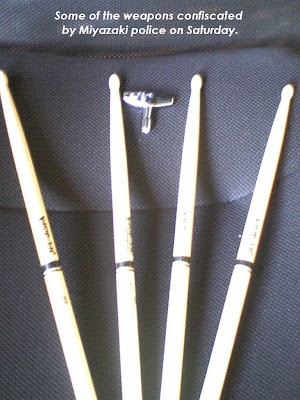 It is alleged that at some point during the trio's performance several young women began to swoon, clutching at their bodies and ripping their clothes off. "We're investigating the possible involvement of illegal substances," police spokesman Taro Suzuki told reporters. "What else could incite such behaviour in beautiful young Japanese women?" he added.

Anyone with information related to this incident or with knowledge of the whereabouts of the suspect "Kyklops" is urgently requested to contact their local police representative.
Posted by Rick at 10:55 AM