My Face Will Blot Out the Sky...

A couple of months back I read the following in a New York Times article (East and West Part Ways in Test of Facial Expressions):

Even now, the differences often remain. When [...] researchers handed students cameras in an earlier study and asked them to take portraits, the subjects filled more space in the frame of the photographs taken by the Americans.

I've noticed this type of thing myself when I compare family pics I've taken with ones taken by my (Japanese) wife. In fact, I frequently (and perhaps naggingly) have to remind my wife that there is indeed a zoom control on the camera; the people in her pics look tiny to me.

Anyway, I was reminded of the above quote from the Times article again this past weekend when I saw some "portraits" of me and my wife that our 5-year-old daughter had drawn. Here's the one she made of me: 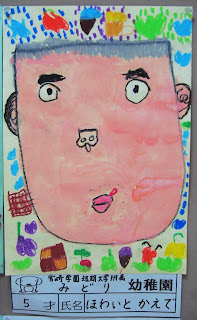 And here's the one she made of her mother: 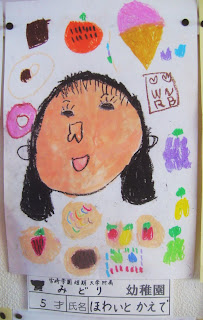 Now, if you're finished laughing about my "big head" (my wife isn't yet), it's possible that you've noticed the different approaches my daughter took in drawing these pictures. Not particularly scientific, I confess, but (I thought) kinda interesting...
Posted by Rick at 8:35 PM

Email ThisBlogThis!Share to TwitterShare to FacebookShare to Pinterest
Labels: family, How to Suck People into Looking at Your Kid's Drawings: The Thinking Man's Approach