[Note: I'm out drinking this evening so I've utilized the future-dated posts thingie. Apologies if I've jumped the gun!]

The theme this week for Glenn and Dave's Weekly Photo Challenge is "restaurant."

I didn't have to go very far to get the two pics below. These two restaurants are situated beside each other directly in front of my condo. The shop in the first pic specializes in yakitori (basically skewered chicken cooked over a barbecue-style grill; they also serve other stuff). The first restaurant in Japan that I had a meal in (excluding the airport) was a yakitori-ya and, much like a baby at it's mother's tit, I was "impressed." Yakitori is my absolute favorite Japanese dining experience. Good food, good conversation, and lots of beer--who could possibly ask for more than that?

Somewhat strangely I've never been in the shop pictured below. According to my wife they don't allow kids, and they also have somewhat irregular hours of operation. I've developed a minor fantasy (based on nothing) about this place being a hang-out for yakuza types. 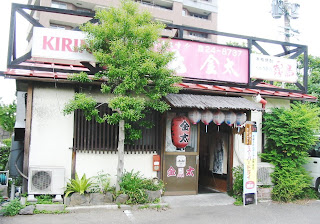 I have been in the shop pictured below (but only once). It's more of a "traditional" Japanese restaurant--a bit fancy, with meals consisting of several courses of small, ornate, and somewhat expensive Japanese dishes whose names I couldn't tell you. Older people and women seem to like these kinds of places. I think a typical guy has to be dragged to these types of places by his wife, who has coerced him with speeches about social/familial obligation, that sort of thing. I'll take the grilled chicken and beer over this any day of the week... 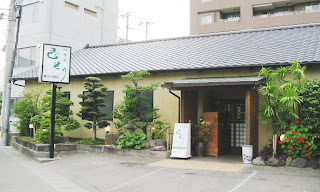