There was another action-packed Sunday jam at The Bar last night. This included, of course, the usual noodling by me and the usual suspects. Also on hand were some cool Japanese cats who were seriously into "oldies" rock 'n' roll. I'm talkin' Del Shannon, The Diamonds, stuff like that. It was a lot of fun (and educational!) backing these guys up. One of them, Takahiro, has a bar here in Miyazaki called Holly's. I'll be over for a drink one of these nights, Takahiro!

Special guests last night were a local band called Mine. I don't want to pigeon-hole them style-wise, because I've only heard the three tunes they played last night. Clearly, though, Mine is a rock band, with a sound that ranges (sometimes in the same song!) between punk, emo, and metal (with some proggy flourishes). They're good and they're loud! Good job, boys! 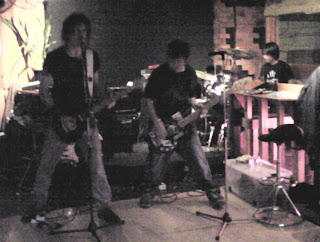 Sorry for the crappy cell phone pic (again this week!). Oh yeah, Mine sounds something like this:

Mine-Things We Need
Posted by Rick at 3:10 PM

Email ThisBlogThis!Share to TwitterShare to FacebookShare to Pinterest
Labels: Jam Night at The Bar, Miyazaki, music