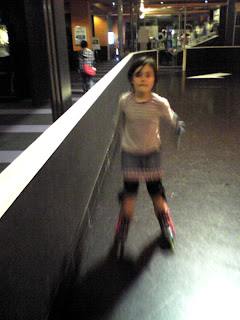 (Miyazaki) In a dazzling display of fatherhood, a local man taught his daughter how to use in-line skates today. No tears were shed by either the young girl or the father.

Bystanders looked on in shocked admiration as the man quickly navigated his daughter through the you're-going-to-fall-on-your-ass-no-matter-what phase of skating.

The girl fell on her ass a couple of times, in fact, but didn't cry, and seemed genuinely interested in continuing.

"Clearly the father is a genius," one witness commented, "but the girl deserves full marks for sticking it out."

The father, originally from Canada, asked that his name be withheld from this report. "We Canadians are a humble race, and we avoid the limelight whenever possible," he said by way of explanation.

The man did say, however, that he was extremely proud of his daughter. He thought he might have a few beers tonight to celebrate.
Posted by Rick at 10:05 PM

Email ThisBlogThis!Share to TwitterShare to FacebookShare to Pinterest
Labels: family