I'm in a bad mood, I can't concentrate, I feel tired. I'm eating too much, and putting on pounds. I'm avoiding social contact. I'm depressed. Yeah, I got dem ole winter blahs. Even living here in sunny Miyazaki for the past 10 years is not enough to stave of this annual bout of bleh. It's even worse here, actually. Back in the old country, where there was at least some comfort in the fact that the weather really was depressing, I used to while away the months of January and February with extended bouts of drinking. And, if I had to go outside, there were always long walks down the dark, frozen, lonely streets, hockey stick in hand, and a chance encounter with a smiling, cheerful face... Of course now that I'm a family man, those small, simple pleasures have been stolen away from me... 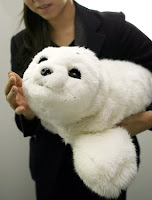 Imagine my delight, dear readers, when I chanced upon this item about a "therapeutic" robot baby seal, designed right here in Japan (by real Japanese researchers!). The "Paro" (as it's called) has been recognized as the "World's Most Therapeutic Robot" by the Guinness Book of World Records!

The 57-centimetre Paro, covered with soft artificial fur, behaves in cuddly fashion on being caressed.

It responds to people's actions and words in a range of ways depending on what action they take toward it, such as stroking and talking to it.

The 2.7 kilogram Paro moves its head and flippers, making sounds and mimicking the voice of a baby seal [...]

[...] it provides healing effects, such as reducing stress and depression levels.

Damn! A robot baby seal for reducing stress and depression! Japanese ingenuity never ceases to amaze! Although it's mildly mystifying why none of the test subjects for this wonderful little contraption were Canadian (possibly they're trying to create market anticipation?), readers possessing only a passing familiarity with Canada and its quaint customs will have no difficulty understanding what this could mean to me and untold millions of other Canadians. I'm ordering one today!

Email ThisBlogThis!Share to TwitterShare to FacebookShare to Pinterest
Labels: boredom, bullshit, stupidity, whining (by me)