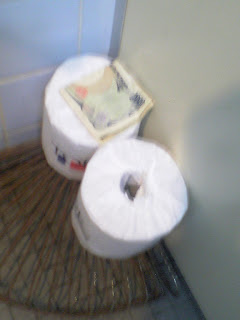 A few days ago, while in the toilet down the hall from my office, I noticed something a bit odd. Sitting there on top of some spare rolls of toilet paper was a one thousand yen note (worth about ten dollars). It had every appearance of having been placed there intentionally (to what end I can only speculate). As if that weren't odd enough, when I went to the same toilet today, the money was still there. As I sat there I pondered the strangeness of this...

How did the money arrive there on top of the toilet paper? Several scenarios occurred to me:
1) It fell out of someone's pocket, perhaps as he was standing up/pulling up his pants. The next person in the toilet found it and set it in a "safe place" with the expectation that the owner of the money would return to look for it.
2) Someone (for some reason) was sitting on the toilet with the money in his hand. At the point when he had to access the toilet paper (surely a "two hand" task for most of us) he set the money down in a clearly visible place, expecting to pick it up again when he was finished his "business." He must have forgotten about it.
3) The money was placed there as a temptation to the greedy and dishonest. Leaving the stall with the note would result in the sudden appearance of a television crew and the extreme humiliation of the one who so foolishly fell into their trap for a lousy ten bucks.
4) The money was strategically placed on the rolls of toilet paper as a political statement decrying the evils of capitalism and showing us that, really, it's all just "ass-wipe."
5) The money appeared there by means of a magic spell or through time travel or it came from another dimension. Perhaps a little bird flew in the open window and left it there.

Such were my musings as I sat there. But then some deeper, more troubling implications began to dawn on me. How could ten bucks sit there, so vulnerable, and for so long, without somebody just picking it up and walking away. This is, after all, a university. There's enough there for two beers at a bar, six beers at a supermarket; enough for three packs of smokes. Ten bucks is ten bucks, after all. I wondered if this were an indication of some deep-seated stupidity among students at Japanese universities. Or, perhaps, this was a sure sign of the stereotypical Japanese "honesty" that I so frequently hear about.

Anyway, it was at this point in my speculations that I detected someone else entering the restroom, so I decided that it was time to wrap things up and get out of there and back to work. It so happened that I had my cell phone in my shirt pocket, so I decided to take the picture you see accompanying this post as "evidence."

Actually, taking this picture proved to be something of a minor embarrassment for me. It was not until the very moment when my thumb was applying pressure to the "snap" button that I remembered: my phone always makes a very audible "camera shutter" sound when I take pictures. It did so this time. Immediately I heard a gasping-type sound from the other side of the cubicle. "Fucking shit", I thought to myself. Whoever that is on the other side knows there's someone in the toilet taking pictures! He's probably wondering what exactly I'm taking pictures of and what kind of fucking retarded pervert I am.

About 20 minutes later I felt that enough time had passed for me to safely leave the toilet. I don't think anybody saw me slinking back to my office...
Posted by Rick at 12:45 PM