From the Really Fucking Stupid Dept.

From This AP story we learn of a discrimination suit being brought against federal officials and JetBlue Airways in the US. Apparently in August of 2006, Raed Jarrar, an Iraqi architect who's been a US resident since 2005, and who's married to an American citizen, was barred from boarding his flight "because he wore a T-shirt inscribed with an Arabic phrase."

The incident is part of a discriminatory pattern at airports since the Sept. 11, 2001, terrorist attacks, with officials targeting people perceived to be of Arab descent — particularly those displaying their ethnic background or religious faith, two civil liberties groups said Thursday in filing the lawsuit.

The ACLU, joined by the New York Civil Liberties Union, filed the federal lawsuit on behalf of Raed Jarrar. The Iraqi architect was barred from the JetBlue flight for wearing a shirt that read, in English and Arabic, "We Will Not Be Silent."

Last August, a Transportation Security Administration official identified only as Inspector Harris pulled Jarrar away from a boarding gate, took him to a JetBlue counter and told him his shirt made other passengers uncomfortable, the complaint said.

Jarrar was told to cover up the message if he wanted to board the flight to his home in Oakland, Calif. The TSA official equated wearing Jarrar's an [sic] Arabic shirt to an airport with "wearing a T-shirt at a bank stating, 'I am a robber,'" the complaint said.

Jarrar, who now lives in Washington, D.C., said he was intimidated into wearing a shirt purchased by a JetBlue customer service agent over his T-shirt. His seat was also moved to the back of the plane and he was forced to board first, said the lawsuit, which seeks unspecified damages.

"We will not be silent" in Arabic and English... Pretty radical stuff. I guess Mr. Jarrar should have had a more "American" slogan on his tee, maybe something like "Live free or die" (although Mr. Jarrar, being an Iraqi, could be forgiven if he found such a slogan too poignantly ironic).

I wish I had been there. I would gladly have loaned him this t-shirt of mine: 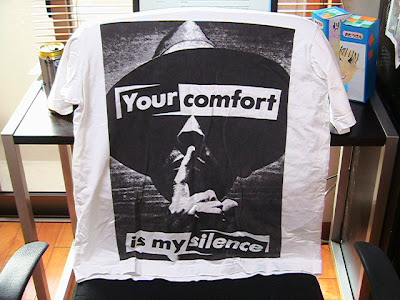