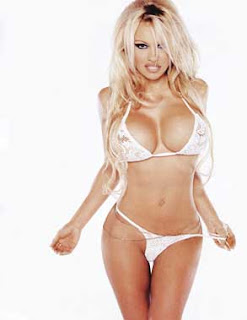 Pamela Anderson was famous from the very moment of her birth. Born on July 1st, 1967, she was officially proclaimed Canada's "Centennial Baby" (the first baby born on Canada's 100th birthday). [According to Wikipedia, however, this would later be shown to be incorrect, as another baby was actually born a couple of hours earlier.]

Not only that, but Anderson has apparently appeared on more covers of Playboy than any other model.

[DISCLAIMER: The appearance of this post immediately following a post on gay marriage in Canada is nothing more than pure coincidence. Honest!]
Posted by Rick at 4:40 PM