You know, I spend so much time whining and complaining about Japan here on my blog, that sometimes, like tonight, I feel bad and want to give something back to my adopted home. That's right, I'd like to say something nice about Japan.

One of the truly (no shit!) good things about the Japanese is that they have a much healthier attitude toward alcohol, and drinking generally. I'm not saying that they have no problems here with, for example, alcoholism and drunk driving. Nor do I mean to suggest that these kinds of problems are accepted (although it's probably true that they're dealt with more quietly--Japan is not a "let's-talk-about-it" society). By "a healthy attitude toward alcohol" I simply mean that the Japanese recognize alcohol as a good thing in life, and they have no hang-ups about having a few beers in the right time and place. As a culture, I think it's also safe to say that the Japanese are also, on the whole, a lot more tolerant of people who may have had a bit too much to drink (there is, for example, no social stigma involved if you get shit-faced at the office party and make a horse's ass out of yourself--not that that's ever happened to me, mind you...). 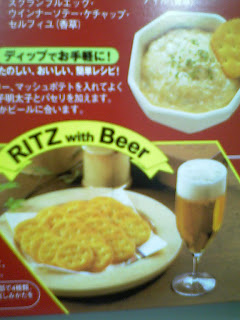 Anyway, this leads me to the picture you see on the left, a picture of the back of a box of Ritz crackers purchased here in Japan. You can't see the whole box, but it's basically a variety of recipe and serving suggestions for the product. One of the suggestions is "Ritz with beer", and really, why the hell not? I ask you, however, would Ritz dare to have it's product mentioned in conjunction with alcohol in Canada or the U.S. (I'm not certain about the U.K.)? Why can't a potato chip or peanut company in North America advertise it's product as the perfect complement to beer? Hell, why can't North American beer companies show someone actually drinking their products? Beer is a legal product, isn't it? Why this hypocrisy? Where does it come from? (Yeah, well, those are rhetorical questions, aren't they, because we know exactly where this hypocrisy and others come from...)

It's a fact, ladies and gentlemen, that in several key areas of life, the Japanese are much more socially advanced, more civilized than North Americans.
Posted by Rick at 9:16 PM