Well, I promised some details about my recent trip to Tokyo, and I'm a man of my word (at least I try to be...). I've got quite a few photos that I'm still sorting through, so I'll break things up into about three or four posts of highlights...

I was very pleasantly surprised when, on the morning of our first full day in Tokyo, my wife suggested that I hop on the train and go shopping in Shinjuku. By myself. I leapt at this opportunity to escape and actually do something enjoyable! I procured the necessary train directions from my brother-in-law (I am a fearless traveller, and was not about to be cowed by the Tokyo train system...). I hopped online for a few minutes to locate my primary destinations (Disc Union and Tower Records). I said my goodbyes, and I was off! 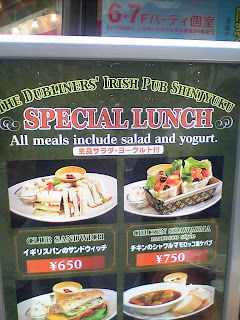 After an uneventful train ride I arrived at Shinjuku Station at around 11 a.m. Perfect! I scouted out the music shops and then had to decide what I was going to do about lunch. As luck would have it, I happened upon an "Irish Pub" (well, about as "Irish" as you're going to get in this part of the world, anyway). Perfect! A tasty club sandwich, an order of fries, and a couple of pints of Guinness settled nicely in my stomach, it was time to peruse and purchase some music! 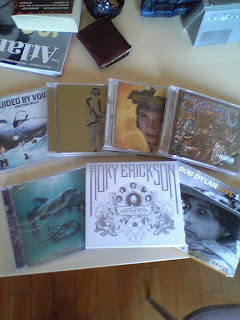 There are a couple of Tower Records shops here in Miyazaki, and really, any music I want can be had here or purchased online, but the Tower Records in Shinjuku has a lot of "listening stations", which allowed me to sample a lot of different discs during a casual and thoroughly enjoyable three hours. From Tower Records I went to Disc Union, a very cool used CD shop, where I spent another couple of hours browsing before making my purchases. You can see my haul in the picture on the left. In case anyone is interested, at the end of the day I returned with the following albums:
Guided by Voices: Isolation Drills
Primal Scream: Riot City Blues
...And You Will Know Us by the Trail of Dead: Worlds Apart
...And You Will Know Us by the Trail of Dead: So Divided
Frank Zappa: Trance-Fusion
Roky Erickson: I Have Always Been Here Before
Bob Dylan: Live 1975-The Rolling Thunder Revue
The Allman Brothers Band: Instant Live: Post-Gazette Pavillion-Pittsburgh, PA (not pictured)

I realize that spending an afternoon shopping for CDs might not seem like such a big deal to many people. Anyone out there who's married with kids, however, can probably appreciate that these opportunities are few and far between. My cell phone only rang one time (it was my wife just checking to see if I'd had any problems in transit). It was a great way to start a holiday!
Posted by Rick at 11:26 AM

Email ThisBlogThis!Share to TwitterShare to FacebookShare to Pinterest
Labels: travel