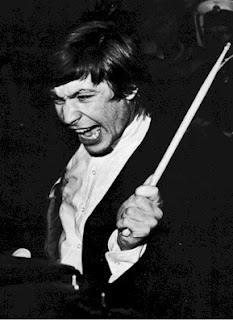 I've written here before about my love for the Rolling Stones. Perhaps one of the truly neglected drummers in rock, Charlie Watts was my personal hero for many years. To my mind Charlie has always been the embodiment of the unspoken/unwritten "rule" that it's the drummer's job to make everybody else sound good. Certainly nobody would ever accuse Charlie Watts of being a show-off. No, Charlie has instead, for the past 40+ years with the Rolling Stones, simply just "laid it down". Fact is, Charlie lays it down better than anybody. So well, in fact, that the rare "flashy" moments often go un-noticed. Well, no more!

Exile on Main St. is, arguably, the Stones' best album. There is no question that this album was Charlie's finest hour. He plays with an abandon that is transcendent. Simply, he fuckin' rocks the joint. He is the star of this, one of the greatest albums in rock 'n' roll history, performed by it's greatest band. It's a bit odd, really, because it's not as though Charlie turned into Neal Peart or something for this album. No, he just did what he usually does, only this time a bit more ...loosely. Anyway, this brings me to tonight's Great Drum Fill:


Drummer: Charlie Watts
Group: The Rolling Stones
Album: Exile on Main St.
Great Drum Fill: "Tumbling Dice"; surely the Stones' best single and possibly the best song to grace commercial radio ever. You really have to listen to the whole song to get the point of this drum fill (it may surprise some people that, yes, there is a point to everything in a good song). At about the 2:20 mark of the song the band "drops out" a bit and then begins to build up to the song's climax. As this is happening Charlie is there, providing minimal backing but building in volume and intensity until at, about the 3:02 mark, the tension releases with a classic drum fill, followed by several more until the end of the song.