A Task of Sisyphean Proportions 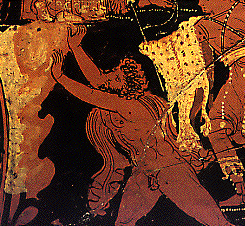 Greek mythology gives us the wonderful story of Sisyphus. You've heard of Sisyphus, he was the guy who so pissed off the gods that they blinded him and sentenced him to roll a giant boulder up to the top of a mountain. When he was finished he had to do it again. Every day. Forever.

Occasionally some stranger finds his way here to my Kyklopean abode and asks the obvious question: "What's it like teaching English in Japan?" I always point such people in the direction of poor Sisyphus. "Go ask him," I say.

And then of course there's Albert Camus, whose brilliant The Myth of Sisyphus gave Kyklopes all over Japan ample reason not commit seppuku. In fact, by my reckoning, Camus gave us all reason to live:

...Sisyphus is the absurd hero. He is, as much through his passions as through his torture. His scorn of the gods, his hatred of death, and his passion for life won him that unspeakable penalty in which the whole being is exerted toward accomplishing nothing. This is the price that must be paid for the passions of this earth...

...one sees merely the whole effort of a body straining to raise the huge stone, to roll it and push it up a slope a hundred times over; one sees the face screwed up, the cheek tight against the stone, the shoulder bracing the clay-covered mass, the foot wedging it, the fresh start with arms outstretched, the wholly human security of two earth-clotted hands. At the very end of his long effort measured by skyless space and time without depth, the purpose is achieved. Then Sisyphus watches the stone rush down in a few moments toward that lower world whence he will have to push it up again toward the summit. He goes back down to the plain... At each of those moments when he leaves the heights and gradually sinks toward the lairs of the gods, he is superior to his fate. He is stronger than his rock.

If this myth is tragic, that is because its hero is conscious. Where would his torture be, indeed, if at every step the hope of succeeding upheld him? ...Sisyphus, proletarian of the gods, powerless and rebellious, knows the whole extent of his wretched condition: it is what he thinks of during his descent. The lucidity that was to constitute his torture at the same time crowns his victory.

I was going to say something witty or sarcastic or ironic here, but I've changed my mind...
Posted by Rick at 11:38 PM