Nobody's ever mistaken me for a save-the-whales, tree-hugging kind of guy. And really, cleaning up after my dog is about as "activist" as I generally get about the environment.

This, however, is a disgrace: 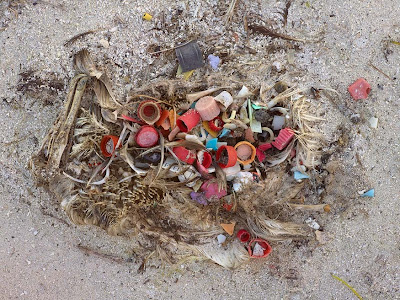 These photographs of albatross chicks were made in September, 2009, on Midway Atoll, a tiny stretch of sand and coral near the middle of the North Pacific. The nesting babies are fed bellies-full of plastic by their parents, who soar out over the vast polluted ocean collecting what looks to them like food to bring back to their young. On this diet of human trash, every year tens of thousands of albatross chicks die on Midway from starvation, toxicity, and choking.

To document this phenomenon as faithfully as possible, not a single piece of plastic in any of these photographs was moved, placed, manipulated, arranged, or altered in any way. These images depict the actual stomach contents of baby birds in one of the world's most remote marine sanctuaries, more than 2000 miles from the nearest continent.

I challenge anyone to go look at all these photos (at the link above) and then tell me they feel no sense of shame about what's happening 2000 fucking miles from the nearest continent. Damned if I know why, but this is really bugging me...

Email ThisBlogThis!Share to TwitterShare to FacebookShare to Pinterest
Labels: pollution, shame, the environment