On the Cover of The Rolling Stone? 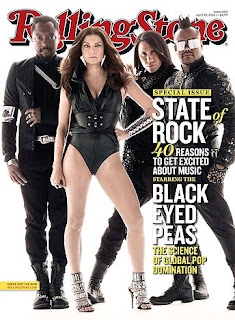 So, like, the latest issue of Rolling Stone (Special Issue!) contains a section called "State of Rock: 40 Reasons To Get Excited About Music: Starring The Black Eyed Peas."

Now, I gotta admit, I don't mind at all looking at that cover. But there's no way in hell that I'm gonna turn the page to see what's on the inside. I already know that whatever's on the inside has been gilded with shit (you know, with a shit spray bomb or something).

I actually used to buy Rolling Stone when I was a kid. I bought it for the record reviews. I get the distinct impression that music criticism isn't a strong point of Rolling Stone these days. I'd be embarrassed to be seen leaving a magazine shop with it these days, unless it was hidden somehow, perhaps sandwiched between the latest copies of Hustler and Easy Rider or something. [Read carefully, please.]

I wonder if this means I'm not getting older, I'm getting cooler, more hip? Bleh, who gives a shit?