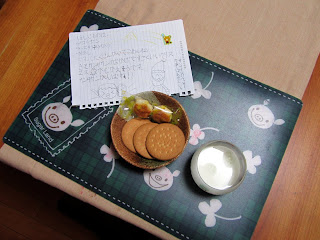 I guess this will probably be the last year that we go through this little ritual. If my kid still believes in Santa when next Christmas rolls around, well, I'm afraid we'll have to have a little talk about that. I'm not much into crushing the dreams of little kids, but... there's a bigger picture to consider.

Actually, I'm not especially concerned on that score, because I get the sense this year that she's already either a) employing a pretty strong suspension of disbelief, mostly out of a child's notion of self-interest (i.e. open disbelief, to her, might mean a sharp reduction in Christmas loot), or b) doing her damnedest to humor her old man. Or possibly some combination of both. Picking up my cell phone and threatening to call Santa when she won't do her homework or stop watching TV just doesn't have the same effect it once did. I tried this the other day and she rather flippantly asked if she could talk to Santa while he was on the line. I saw my future in that moment. It wasn't pretty...

Enough of that! Anyway, part of me is a little relieved that I won't have to worry about Santa next year. I'm basically the "Christmas guy" in my house, and Christmas Eve is a bit busy and stressful for me. I'm the guy who helps my kid put out a snack for Santa, who makes sure the presents are under the tree, who goes out and buys stocking-stuffers, who leaves a "thank-you" note from Santa (for the milk and cookies), and all that crap. I'm not complaining, really, but this is Japan, and it's not like there's a whole lot of outside support here! My wife helps by basically staying out of my way. What can I say? I just want my kid to have some idea of something that made me happy when I was a little kid; some small part of the place where her father comes from. Before coming to Japan I spent 39 Christmases at home with my family. Old habits die hard.

Speaking of "old habits," I hope you all have a Merry Christmas!
Posted by Rick at 11:08 PM