For the first leg of the trip we took a few weeks ago we had to take a two-hour drive to Shibushi in Kagoshima in order to drive onto a car ferry (the Sunflower Kirishima) for an overnight trip to Osaka. It's actually possible to take a similar ferry ride from here in Miyazaki, but that ferry was booked solid when we (i.e. my wife) were planning the trip. 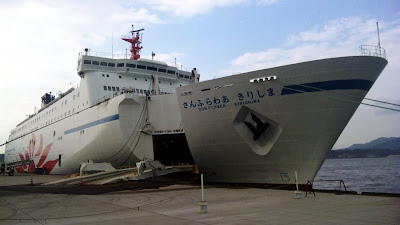 This was the part of the trip I was looking forward to the most. I really enjoy being out on the water, and this was my first overnight trip on a ship since crossing the Atlantic with my mother when I was about 2 or 3 years old (we were going to live in Germany for a few years). It's not possible for me to become bored while traveling on water. I wasn't bored this time. 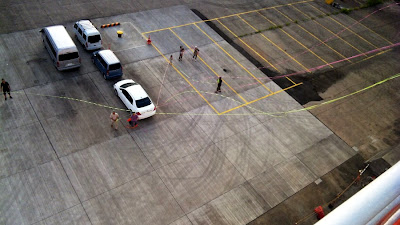 The Sunflower Kirishima is a pretty big ship, and we had our own private room. Just like in Titanic! I joked to my wife. I wandered around for hours, smoking cigarettes and taking pictures. That's what I call "relaxing"! 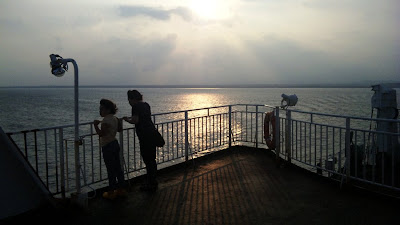 Later in the evening I wandered down to a common area where there were vending machines and a smoking room. The vending machines served beer and shochu. (Have I ever mentioned what an absolutely civilized place Japan is?) I smoked some cigarettes and drank a couple of beers between my wanderings of the outside decks. Each time I came inside to get a beer I noticed a couple of older Japanese guys sitting by the vending machines drinking and talking. About when I had decided to get my last beer and make my last rounds of the ship, I returned to the vending machine area. After getting my beer, I glanced over at the two Japanese guys, who were still there drinking and talking. As soon as they noticed me looking in their direction they motioned for me to go over and join them. Now, normally I'm a bit reticent about getting into conversations with Japanese people I don't know, mainly because of the horrid state of my ability in the language. One of the wondrous properties of alcohol, however, is that it allows one to wax loquacious in pretty much any damned language you'd care to mention, so I went right over and plonked myself into a chair...

We must have talked for a while (about what, I don't actually remember), because the sun was coming up as I stumbled back to the room where my wife and daughter were sleeping. I vaguely recall (probably a dream?) some angry words from my wife. It seemed that I had no sooner put my head on the pillow when my daughter was shaking me, saying, "Wake up Daddy! We're in Osaka! Let's go have fun at Universal Studios!"

Yes, I thought to myself. Let's go have fun at Universal Studios...
Posted by Rick at 8:50 PM