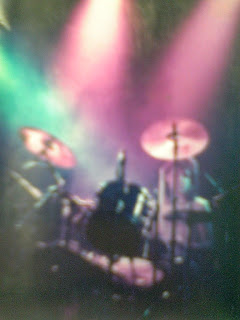 I made a brief reference in a post back in December to the fact that I was once a professional musician, a rock drummer. By way of proof, I offer the rather poor photo on the left, which somehow manages to be both grainy and blurry at the same time (it's actually a photo of a wallet-size picture, taken with my cell phone, and you can click for a larger view, but it won't help much). (This photo is also evidence in support of my generally dis-believed claim that I once had hair on my head.) In fact it's been about 16 years since I've done any serious playing, and about 10 years since I've even sat behind a kit. How rock 'n' roll has survived my absence these long years is perhaps a mystery fit only to be investigated by my own fertile imagination during late-night bouts of drinking and listening to old Stones albums... But, I digress! You probably didn't notice it, but there was a tremor in the rock "ether" last Friday night...

I don't go out to bars much these days, what with being a "family man" and holding down a "respectable" job and being a "pillar of the community" and all that stuff that "normal" people do. No, these days I might head out to a bar an average of once every few weeks, and then it's usually to do some face-to-face catching-up with the few friends that I have here in Miyazaki. Well, last Friday was one of my rare excursions to the land of sin and salvation that is downtown Miyazaki. I met a Canadian friend at what is currently Miyazaki's "gaijin" bar, a place run by an Israeli friend of ours. I gave my friend a Stones disc I had made for him, and we proceeded to drink beer and talk. My friend plays guitar, and he frequently does live gigs around town in the evenings and on weekends. We talked mostly about music, and as we plied ourselves with beer we began to discuss the possibility of maybe putting something casual together, just for fun, and playing the odd gig here and there. Beer has the magical quality of making the "impossible" seem imminently do-able, and soon I was imagining that, hell yeah, my wife wouldn't have any problems with me dropping a couple of thousand on a new drum kit and spending my evenings and weekends jamming with my friends, drinking beer, and hanging out at bars. A man needs a hobby, after all! (There is perhaps a scientifically verifiable reason why wives, apparently through all of recorded history, generally have a dim view of their husbands' friends, and get visibly nervous when their husbands go drinking with friends...)

Later that night we went to another bar where there was an informal jam happening. There were only a few people there, and they were all musicians. My friend got up on stage and played a couple of tunes, and the next thing I knew I was being invited to play a couple of tunes. I initially declined, thinking that the combination of rustiness, nervousness, and drunkenness would render me incapable of playing anything. Everyone kept insisting, though, until eventually I found myself on the stage with my friend and some other guys. I was sitting behind a drum kit, with a pair of sticks in my hands! My friend started playing Hendrix's version of All Along the Watchtower on his guitar! I couldn't breathe! I couldn't move! You've been here before, moron, I thought to myself, and started playing the drums...

Now, as pleasing as it would be to tell you that I rocked the joint that night, I can't. I sucked pretty hard, actually. But, I had a really good time and this was a pretty good bunch of guys. Once they found out that I hadn't played for a really long time it seemed to become their holy mission to give me as many turns on stage as the other drummers. A couple of guys even insisted that I needed to play, that my very life depended upon it. They were right, of course. They were, and are, every one of them, my brothers. Now if only I can figure out how to sneak a drum kit into the house without my wife noticing...
Posted by Rick at 2:30 PM

Email ThisBlogThis!Share to TwitterShare to FacebookShare to Pinterest
Labels: music