You know, I usually don't feel like writing. It's odd, really (because I really love talking). I think it stems from my days at university. They kept making me write all these papers to show that I understood the topic and whatnot. I would write them and they would (generally) praise them. Then they would make me write some more. Why the fuck couldn't they just ask me? Couldn't they see my genius? Well, actually, I'm neither stupid nor naive enough to seriously ask that question. Not here, anyway...

So. While I'm killing time and avoiding writing, please let me recommend to you some music I've been listening to tonight. (Actually I like music a lot more than I could ever like reading and/or writing. That's another story, however... [From the "Did I say That?" Dept.: I may have over-stated myself here...])

I've recently discovered a very cool and interesting Australian band called The Drones. You've probably already heard of Hüsker Dü (there's supposed to be some kind of umlaut-looking thingie over the 'u's, but I can't be bothered finding the right fucking font or whatever just so I can perfectly capture the correct spelling of a fucking rock band--they're fucking good, though). [UPDATE: Copy and paste umlaut goodness courtesy of Maht.] If you don't know Keef (Keith-fucking-Richards!! Talk Is Cheap is the one to look for), go crawl back into your hole. By now everyone must have heard of Neko Case. If you haven't, I demand to know right now what the fuck you've been listening to.

There's more, actually: Comets on Fire (psycho-delic!), ...And You Will Know Us by the Trail of Dead (So Divided was maybe the best rock album of 2006), Irma Thomas... shit, I could go on forever...

Anyway, here's some pictures I took of cranes. They're ubiquitous in Japan (as is any and all manner of construction). 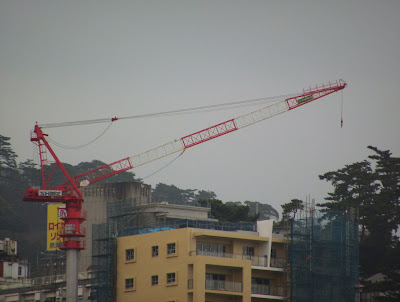 Here's a crane in Atami. 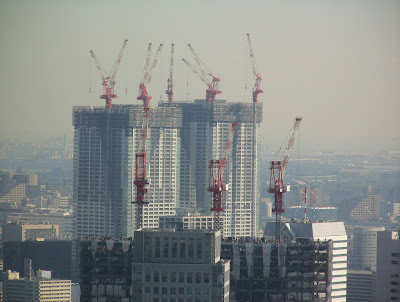 In Tokyo, cranes litter the landscape (heh, what a stupid sentence!). 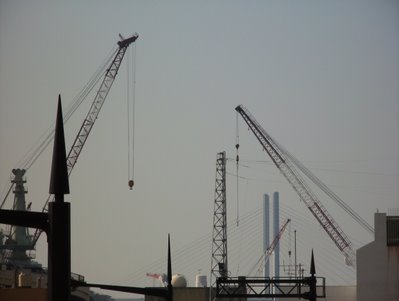 Cranes in Nagasaki harbor. This is a repeat pic, but for some reason I really like this one...

[UPDATE #2: I completely forgot about the two cranes in the picture below from the zoo in Miyazaki .] 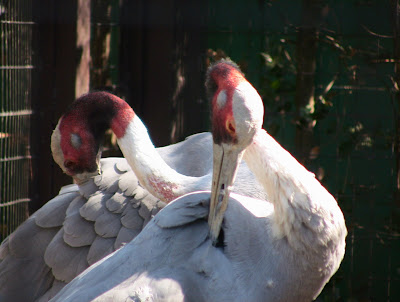