From the Annals of the Absurd

Recently my 4-year-old daughter has expressed some unhappiness about going to her kindergarten. Why? Apparently a couple of kids at the kindergarten, on two different occasions, have told her that they they didn't want to play with her because she's "fat" (futotte iru, in Japanese). Both my wife and I had strong reactions to this. Unfortunately, they were very different reactions...

Now, before I continue I should probably point out a couple of things. Firstly, the Japanese are typically quite slim, especially compared to Westerners. That does not mean, however, that there are no "fat" or "chubby" people in Japan. There are plenty. Secondly, the Japanese are more keenly aware and less tolerant of "difference". (People will debate this point, but frankly they don't know what they're talking about.) 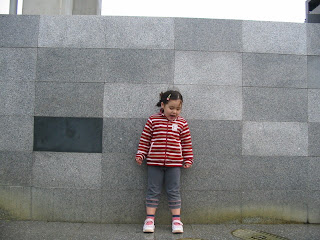 Regarding my daughter, yes, by Japanese standards she is quite big--she towers over her playmates and nobody (not even me!) would call her "slim". I've got no problem saying that my daughter is a little on the "chubby" side, but where I come from she looks perfectly "normal" and only an anorexic psycho would look at her and see a "fat" person. So, on top of being a "half-baby", my daughter is also bigger and taller than other kids (she's bigger and taller than most first- and second-graders here). Since she's been born I've been preparing myself to deal with problems related to "race" and "ethnicity". This "fat" thing is another can o' worms altogether...

My wife, being Japanese, thinks my daughter should start dieting and getting more exercise and the problem will go away. (To be fair, this is Japan we're living in, so I can't just dismiss my wife's views simply because they go against my gut feelings.) I, of course, don't think my daughter has a problem at all. The "problem" is with Japanese attitudes and perceptions, and I don't like the idea of forcing her into some action just to conform with other people's ideas about what is "normal" or "acceptable". She's a sweet, beautiful, healthy little girl. Why mess with that?
Posted by Rick at 6:30 AM