Can you remember your first face to face encounter with Santa? There's a good chance that, unlike most kids who were happy to meet Santa and later grew up to be normal people, you were traumatized by the experience and are still mentally and emotionally scarred from "sitting on Santa's lap".

The Scared of Santa Gallery [link via John's Universe] is a celebration of that traumatic moment in the lives of many children when, contrary to their expectations, Santa scared the living shit out of them. A couple of samples: Aww, now isn't this just a scene right out of a Rockwell painting? A jolly, smiling Santa and three terror-stricken kids doing their damnedest to get the hell outta there. 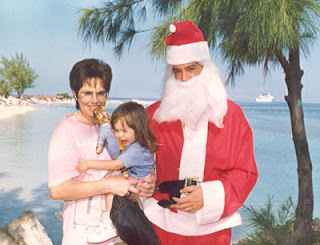 Occasionally it might happen that a young child is perfectly justified in being a little nervous about Santa. The Santa in this photo is clearly wrong somehow, don't you think? The mother's smile is evidence of a deep-seated pathology no doubt caused in childhood by her own traumatic Santa encounter.
Posted by Rick at 5:14 PM