Christmas in Japan, Factoid #2: The Colonel's Recipe for Christmas Cheer! 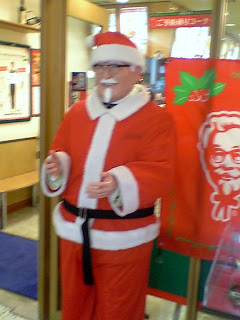 [Note: I'm truly sorry about the poor quality of the photo on the right. You see, for one thing it was taken with my cell phone. For another, I was a bit rushed while taking it because several people were looking at me like I was some kind of dork who'd never seen Col. Sanders before. They're right about the dork part, but I actually knew who Col. Sanders was before I came to Japan...]

Many people will try to tell you that there's no traditional Christmas meal in Japan, but I'm here to tell you that they are all damned liars. I know for a fact that every single person in Japan has Kentucky Fried Chicken on Christmas Eve. You see, they have no ovens in their houses with which to cook turkey. And turkeys are big, whereas pieces of the Colonel's secret recipe chicken are small, and the Japanese like small things (because they themselves are small). Furthermore, anyone caught not eating KFC on Christmas Eve is hauled out of his house and shot in the street for blaspheming the holy spirit of Christmas. You don't fuck around with the Japanese when it comes to holy days...
Posted by Rick at 11:03 PM