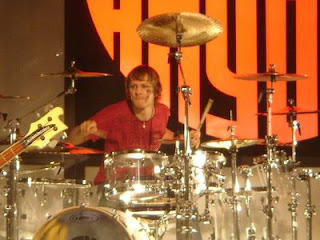 There's really not much out there these days for guys like me who long for new bands with that "classic" rock sound. The last really good classic rock band to come along were Black Crowes. I've heard flashes of brilliance elsewhere, but only momentarily. It's not that I've got anything against what they call "rock" music these days, mind you. Nirvana and the whole "alt rock" thing have done a lot literally keeping rock music alive during the reign of rap/hip hop (a genre that, when it's good, is very good, but which these days seems to be suffering a worse case of bloat than rock did in the pre-punk days). What has always been lacking, to my mind, with the newer generation of rockers, is a certain flashiness, the strut that makes rock rock. Why the hell don't these guys play like whether or not they get laid tonight depends upon it? For fuck's sake, can anybody play a guitar solo anymore? Yeah, I know I sound like an old fart, and I am, but mark my words (sorry, I couldn't resist), this "pretend" rock 'n' roll will lead to the end of barroom brawls and teenage pregnancy... er, whatever.

I was very pleased a couple of weeks ago to discover the band Army of Anyone. A "supergroup" in the same way as Audioslave (except a lot less annoying), Army of Anyone consists of former members of Stone Temple Pilots and Filter, with a very special ingredient: drummer Ray Luzier, who's perhaps best known for his work with David Lee Roth (of Van Halen fame). Whoa! These guys ain't kids, kids! They play rock like men(you can take that however you like, I don't really care). Ray Luzier plays drums like there is no tomorrow! If anything I've said here makes any sense to you, please check these guys out. Tonight's great drum fill:


Drummer: Ray Luzier
Group: Army of Anyone
Album: Army of Anyone
Great Drum Fill: In the song "Goodbye", at about the 3 minute 10 second mark, Luzier launches into what is really a series of drum fills, the likes of which I haven't heard on a rock album for a long time. You'll hear other, more technically proficient stuff. You'll here other, more popular stuff. You won't hear anything better.