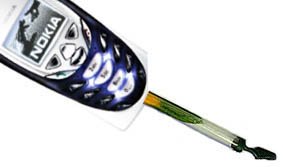 From the Daily Yomiuri, this story about a cell phone attached to a breath analyzer that is becoming popular with bus and transport companies. Apparently there has been a recent rash of incidents involving drunk drivers which has led Japan's Construction and Transport Ministry to impose stricter administrative punishments on transport and other companies "that allowed employees to drive while under the influence of alcohol or did not properly supervise their drivers to prevent such reckless driving habits."

The new system, which uses NTT DoCoMo's FOMA third-generation cell phone equipped with a breath analyzer, is easy to use. First, the driver makes a video-phone call to his or her company and breathes into the analyzer connected to the cell phone. The video image showing the driver blowing into the analyzer and data regarding the alcohol concentration on his or her breath are transmitted to the company and confirmed by computer there.
[...] The company can check the alcohol concentration while watching the video image, eliminating the possibility that a drunken driver might try to get around the system by getting somebody sober to pose as the driver to breathe into the analyzer.

Some companies are using the systems to check alcohol levels before employees begin their shifts, and to check whether someone is driving under the influence the morning after a night on the town.

Personally, I'm in favor of anything that can help reduce the incidence of drunk driving. What worries me, however, is the potential for abuse if this device is put into the wrong hands. I can imagine a time when a breath analyzer is a standard feature on cell phones, especially here in Japan where they love to cram a million useless features into any piece of technology (if I desire it, for example, my current cell phone will emit the sound of maracas when shaken...). Who the hell wants his wife calling him in the middle of a Friday night binge with his buddies so she can check on how much he's been drinking? Now, I'm not talking about myself, of course, no no... It's the principle, the ideal, nay, the sanctity of our cherished notions of liberty and privacy that concern me. Yeah, that's it...