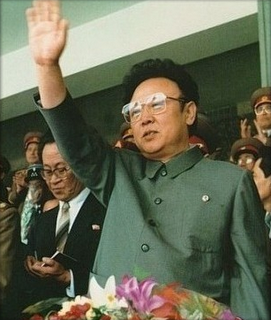 Just when I was about ready to give up on them, my buddies over at the Korean Central News Agency of the Democratic People's Republic of Korea have returned with a vengeance. Yes, after months of lazy, uninspired, and --dare I say it?--almost civilized rants against Japan, the U.S. and anyone else who looks like a running-dog lackey of the imperialist hordes, my guys, yes, my guys (for I love them as surely as the sun rises in the east...) are back with a healthy dose of that good old down-on-the-rice-paddy, angst-ridden, I-don't-know-how-to-use-English-grammar-or-vocabulary-and-I-don't-give-a-fuck political invective.

So, what has got "the sun of the nation and mankind" pissed off this week? What maggoty grain of purloined rice has lodged itself 'twixt his teeth? Well, it seems that the Japanese, "bat blind philistines" the lot of them, have had enough of lobbed missiles, kidnapped citizens, imported drugs, and spying. With the support of a U.N. Security Council resolution behind them, Japan last week approved a new set of financial sanctions against North Korea.

The sanctions — called for in a U.N. Security Council resolution that denounced the July launches — ban fund transfers and overseas remittances by groups and individuals suspected of links to North Korean weapons programs.

"By taking these measures, we have demonstrated the resolve of the international community and Japan that is in line with U.N. Security Council resolution," Chief Cabinet Secretary Shinzo Abe said.

"I do not know how North Korea will respond, but I hope North Korea will accept the U.N. Security Council resolution in a sincere manner and respond to various concerns of the international community such as on their missile launches," he said.

I guess you could call North Korea's response "sincere". The Korean Central News Agency (Sept. 25-UPDATE: Sorry, this should say Sept. 26) translates for us from Rodong Sinmun:

[...] Dancing to other's tune, Japan is attempting to pressurize and strangle the DPRK with such "financial sanctions" to drive it somewhere. It is, however, a poor, third-rate diplomacy of bat-blind philistines.

I don't mind telling you right now that I could read this stuff forever. For me it has the essence of, oh, I don't know, Nietzsche on acid...

Japan is whipping itself into senseless frenzy to please the whim of its American master. It is acting flippantly not to fall behind the U.S. in the racket of sanctions against the DPRK. It does not warrant surprise, considering that Japan has made it its physical quality to lick the boots of the American master and tail behind the U.S. It is unseemly for Japan, styling itself "a big power," to behave like this.

Japan's noisy row of "financial sanctions" against the DPRK is a disgusting behavior of a slovenly political charlatan bent on refurbishing his public image by ingratiating himself with his American master and feathering his own nest by following the U.S.

Japan's clumsy and wicked act is a perfidy trampling upon the spirit and requirements of the DPRK-Japan Pyongyang Declaration.

You know, if I could get my Japanese university students to speak and write like this, my job would be a helluva lot more fun...

It is an utterly unreasonable sophism to describe the application of the "financial sanctions" as "a catalyzer" for "dialogue." It is a folly rendering the problem more complicated and carrying the DPRK-Japan confrontation to extremes.

It is justifiable and natural for the DPRK to put up a tough rebuff to Japan's desperate political provocation. The situation is very serious and the consequences are unpredictable. Japan would be well advised to behave with discretion, pondering over the serious consequences to be entailed by its harebrained act against the DPRK.

And there you have it. Well, Korean Central News Agency of the Democratic People's Republic of Korea, you've been a stranger too long. It's good to have you back and in such fine form. Until next time, farewell, my friends.