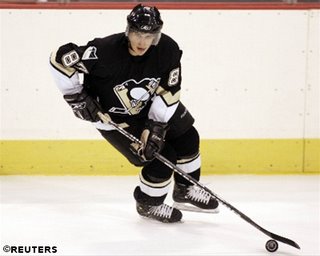 My fantasy hockey league completed its draft a couple of days ago. I think I did pretty well, especially at centre and defense, but once the season starts I may have problems on the wings. In goal there's a lot of potential (for success or disaster...).

The league I'm in allows for a roster of 23 players--3 centres, 3 left wingers, 3 right wingers, 6 defencemen, and 2 goalies can start on a given day. There are 6 bench positions, and there are also 2 spots available on the injured reserve if it becomes necessary.

Anyway, here's the team I have as of now (I'm really hoping to trade for an established left-winger who can score, so this might change):

Tags: fantasy sports : hockey
Posted by Rick at 8:48 AM