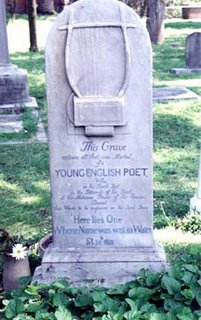 I guess it could be argued that a site like Find A Grave probably has some utility as a reference source ("Millions of Cemetery Records and Online Memorials"), but personally I think it's more interested in pandering to a morbid fascination with celebrity. The most popular searches at the time of this writing include some unsurprising results:
Number One: JonBenet Ramsey (I refuse to link to this because, well, I like to think that I have some sense of decency. If I seem a trifle self-important, too fucking bad...)
Other 'Celebrities' in the Top 20: Ingrid Bergman (2); Hedy Lamarr (3); Lee Marvin (!) (5); Jim Morrison (15); Diana Spencer (16);
Surprisingly (to me, at least) coming in at number 6 is Saint John the Baptist.
The photo (click for larger view) is from the gravesite of my favorite poet, John Keats (this is a good place to start if you're unfamiliar with Keats' life and poetry). The inscription at the bottom of the gravestone reads, "Here lies one whose name was writ in water". This was what Keats requested shortly before his death, at the age of 25. The words above this were written after Keats' death by a friend who was bitter about how the young poet's life turned out.

This living hand, now warm and capable
Of earnest grasping, would, if it were cold
And in the icy silence of the tomb,
So haunt thy days and chill thy dreaming nights
That thou wouldst wish thine own heart dry of blood
So in my veins red life might stream again,
And thou be conscience-calmed—see here it is—
I hold it towards you.

Email ThisBlogThis!Share to TwitterShare to FacebookShare to Pinterest
Labels: Misc.