This Week in Hockey...

... my beloved Boston Bruins handed the Vancouver Canucks their collective asses on a platter. After losing the first two games (of a best of seven) in Vancouver--games which were very close and they could just as easily have won, the Bruins won the next two in Boston by a combined score of 12-1. The Bruins kicked ass. With two of the last three games in Vancouver, the Bruins will have to win one away. The next game is in Vancouver tomorrow morning (Japan time). I'll be watching with a hangover. I hope the Bruins are feeling as nasty as I will be...

--Future events such as these will affect you in the future.

--I grow concerned for your craniofacial integrity.

--The most feared punctuation on earth.

I'm not really one to dwell on how many page hits my blog gets each day or month or whatever. Considering the effort I generally put into this blog, I figure I get about as many visitors as I deserve--sometimes maybe more. I *am* interested, however, in how people (aside from friends) end up here. I'm interested in the search terms they use, what pictures or posts seem to draw attention, that sort of thing. Like most (maybe all?) of my blogging friends, there are no ads on my site. Just me blowing my own horn... Like most bloggers I know, I've been using Sitemeter to keep stats for this site since Day 1.

Anyway, of late I've been checking out Blogger's stats for my site and comparing them to what Sitemeter says happens in these parts. (In fact, it was only recently that I even noticed that Blogger offered a "stats" tab.) The screen grabs below are from earlier today.

Here's what Sitemeter says (from this afternoon): 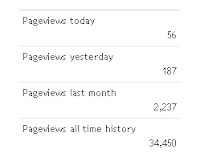 Common sense tells me that Blogger/Google has a much better handle of traffic on its own sites that any third party could. The two services measure somewhat different metrics, but if Sitemeter's actual hit count is as far off as it seems, then it is pretty much useless.

I've noticed that Blogger stats records a lot of spammy-looking page hits. But I've also noticed that Sitemeter misses a lot of really legitimate page hits from actual links. (I'm reminded a bit of Technorati--is there a more useless site on the web?)

We changed the name of our band... 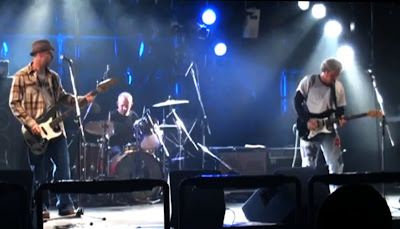 Back down to a 3-piece, a little heavier, a little jammier. Now if only someone besides our middle-aged ex-pat friends would come and see us...
Posted by Rick at 10:14 PM

Email ThisBlogThis!Share to TwitterShare to FacebookShare to Pinterest
Labels: blogging, Google, Heartrippers, links, not really relevant to anything in particular, statistics, The Dead Flowers