With the kid away visiting relatives, my wife thought it would be a good opportunity to drive up to the big city (Fukuoka) and do some shopping. She wanted to go to this place that she'd heard about--from friends, TV, the web, I don't know; she wanted to go to Costco. Since I'd never been to a Costco myself, I was interested and agreed to go.

It might seem strange to hear someone from North America say that he's never been to a Costco. Fact is, until my last trip back to Canada a couple of years ago, I'd never even been to a Walmart before. There is, I think, a pretty simple explanation for this. By the time these entities had started becoming common all over North America, I was a) well past the age where I'd be living at home with my folks, b) a poor, struggling student, and (most significantly) c) without a car; anything's possible, I suppose, but taking the bus to Costco seems a bit odd somehow...

And speaking of cars, it was only after living in Japan for a few years that I finally got a driver's license and bought a car. I did these things in Japan the same way any Japanese person would. I even went, like most Japanese, to a driving school here before obtaining my license. Having little or no previous experience to refer to, there was (for me) nothing particularly odd about experiencing these things in a Japanese context.

Anyway, I was talking about Costco... 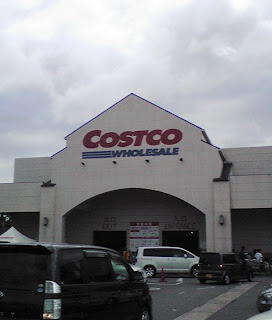 Home of the 5lb. bag of potato chips.
You can't really tell from the picture above, but there was not nearly enough parking here to accommodate all the shoppers. This is a problem all over Japan. In fact, I'd guess that it's a problem for drivers anywhere outside the US/Canada/Australia, for reasons too obvious to waste space here discussing it or complaining about it.

Of course, before we could go in and start buying things as God Himself designed us to do, we had to become Costco "members." This meant shelling out 4,200 yen before we even set foot in the door. As my wife is filling out the papers, I'm thinking about the gas we used in the 300 kilometer ride from Miyazaki to Fukuoka, and doubling it for the trip back... Thinking about all the stuff that was waiting for me inside, however, kept pushing such practical trivialities from my mind.

I thought it was a nice touch when, having been granted membership and making our way into the place, we were presented with our own jumbo-sized shopping cart. (I looked, but I couldn't find our names emblazoned anywhere on the cart--probably done with micro chips or something these days...)

I've read that the great churches were designed to elicit a big religious WTF! when unsuspecting believers entered them. So too, the Costco's and Walmarts of today fill modern worshipers with a sense of awe and power--economic power, for surely you wouldn't be there if you didn't have any money! 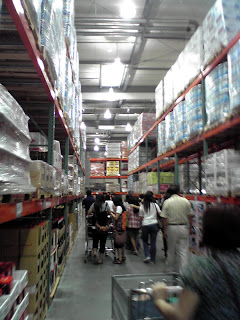 As far as the eye can see... Stuff!
Like the guy in Jaws, when he first sees the massive shark and tells his shipmates that they need a bigger boat, I turned to my wife and asked if she thought our shopping cart was big enough. My wife gave me one of those looks that wives have been giving husbands while shopping since time immemorial. I went outside and had a cigarette.

When I went back in my wife was nowhere to be seen, no doubt consumed by a frenzy of consuming. The place had swallowed her up. She was somewhere deep in the bowels of Costco. Well, you get the picture. I couldn't see her anywhere. I decided to wander around and have a look at what was there--all of it, mine for the buying! Hey, that's a good deal on mini DVD's for the video cam. I scoop up a 5 Pack. 3,500 yen for a pair of Levi's!? In my size? I sling them over my shoulder. Whaaat? A two-pack of French's mustard? You can't get that stuff in Miyazaki. I pick it up. OMFG!! A 12 pack of Campbell's chicken noodle soup? For 900 yen!? After about 30 minutes or so I'm beginning to look like some kind of hermit crab, festooned with all manner of consumer goods, stumbling around looking for my wife, who's got the goddamned shopping cart.

When I finally find my wife she gives me an odd kind of look. I'm not sure if it was a look of pity, or a look of contempt. (Nietzsche, you know, thought they were the same thing...) And what does she have in the shopping cart? Some clothes for our daughter, some cleaning supplies, and a small coffee machine (the old one is broken). I slowly begin to walk backwards...

And so ends my tale of our trip to Costco. I got to keep the soup. 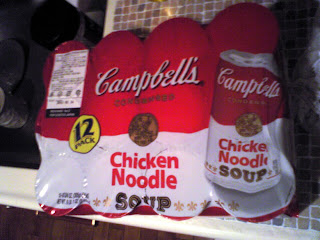 Email ThisBlogThis!Share to TwitterShare to FacebookShare to Pinterest
Labels: life in Japan, shopping