"Unspeakable horrors from outer space paralyze the living and resurrect the dead!" 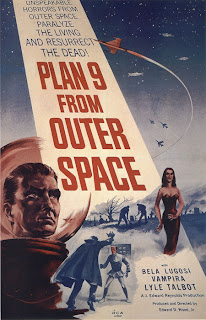 The Ruler: Plan 9? Ah, yes. Plan 9 deals with the resurrection of the dead.

-----
Tanna: Eros, do we *have* to kill them?
Eros: Yes.
Tanna: It seems such a waste.
Eros: Well, wouldn't it be better to kill a few now than, with their meddling, permit them to destroy the entire universe?

-----
Paula Trent: ...A flying saucer? You mean the kind from up there?
Jeff Trent: Yeah, either that or its counterpart.

-----
Colonel Tom Edwards: You speak of Solaranite. But just what is it?
Eros: Take a can of your gasoline. Say this can of gasoline is the sun. Now, you spread a thin line of it to a ball, representing the earth. Now, the gasoline represents the sunlight, the sun particles. Here we saturate the ball with the gasoline, the sunlight. Then we put a flame to the ball. The flame will speedily travel around the earth, back along the line of gasoline to the can, or the sun itself. It will explode this source and spread to every place that gasoline, our sunlight, touches. Explode the sunlight here, gentlemen, you explode the universe. Explode the sunlight here and a chain reaction will occur direct to the sun itself and to all the planets that sunlight touches, to every planet in the universe. This is why you must be stopped. This is why any means must be used to stop you. In a friendly manner or as (it seems) you want it.
Lieutenant John Harper: He's mad.
Tanna: Mad? Is it mad that you destroy other people to save yourselves? You have done this. Is it mad that one country must destroy another to save themselves? You have also done this. How then is it "mad" that one planet must destroy another who threatens the very existence-...
Eros: [shoves her roughly aside] That's enough.
[to the humans]
Eros: In my land, women are for advancing the race, not for fighting man's battles.

-----
Jeff Trent: Modern women. They've been like that all down through the ages. Especially in a spot like this.

-----
Can you prove that it didn't happen? [...] Perhaps, on your way home, someone will pass you in the dark, and you will never know it... for they will be from outer space.