Friday Skiving Off Work Video(s): The Dolls, Then & Now 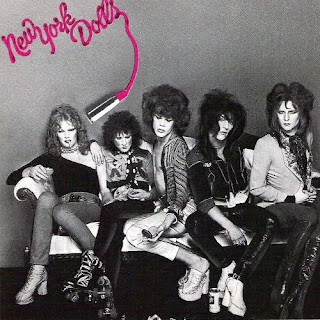 Punks? Drag queens? Punks in drag? The Stones in drag? I can't remember for certain when I first heard about The New York Dolls. Probably reading Creem or Circus... I dunno. I do remember the odd looks I got as I plopped a copy of their debut album down on the counter of the local record shop in my small hometown in Nova Scotia, back in 1973. (I was only 15, so I was still a bit sensitive about what other people thought.) And the music! "Punk" before I knew what it meant. Like "punk-Stones" or something. Sloppier than the Stones, but not as tight (if that makes any sense to you). Out of control. Incredible.

Check out this great live performance of the Dolls' "signature" tune, "Personality Crisis". Check the threads on the bass player!

Here's another great live perfomance from the old 70's show Rock Concert. Here, the band gives their audacious, jaw-dropping rendition of "Stranded in the Jungle" from their (all too) aptly named second album, Too Much Too Soon. This must be seen to be believed.

In 2004 David Johansen and Sylvain Sylvain put a band together and called it the New York Dolls. They released an album in 2006, One Day It Will Please Us to Remember Even This. Johnny Thunders and Arthur Kane are missed dearly, but this album is really quite good. Here's a fun, irreverant number from the album, "Dance Like a Monkey". Enjoy!