You'd think that after five days in California I might have managed to take a few interesting pictures. Sadly, no. In fact, it seemed I did more driving than anything else. This picture, taken from my hotel room, pretty much captures the image of California that I returned to Japan with. 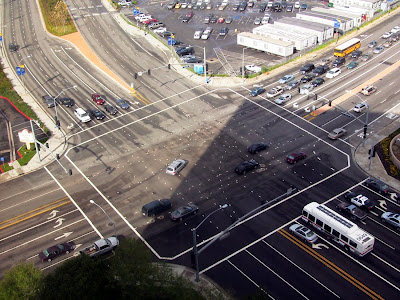 In fairness, this has more to do with a busy work schedule than with California "sucking" or anything like that. A couple of (very subjective) general observations:

--Aside from a few security types (especially at the airport), this trip really reinforced my perception of Americans as being incredibly friendly, generous, and kind to visitors. I've been to Boston, New York, several New England states, and now Los Angeles/Southern California. Every encounter I've had with Americans in America has been a positive experience. Maybe being Canadian allows me to "pass as American," but still...

--I found this strange, especially in a place like California: the salads I had at restaurants were awful. It was the lettuce. It seemed somewhat off, or at least not very fresh. I had one very good spinach salad, though. Everything else I ate was awesome.

--At my hotel, at the malls, pretty much everywhere I went, the service staff were Spanish-speaking people (I assume from Mexico). This in itself is not very troubling to me, but I hope that these peoples' kids at least have the chance to go to university, etc.

--This probably has more to do with me being an English-speaker and a Canadian than anything, but I clearly felt more comfortable on this trip than my Japanese colleagues. It sometimes seemed to me that, for them, anything less than complete obsequiousness from wait staff, for example, was to be interpreted as outright hostility. Personally, I quite enjoy it if someone in a shitty job can find a clever, subtle way of letting me know that I'm being an idiot. I'm not talking about general rudeness, I'm talking about an intelligent person reminding me that he/she is my fucking equal, regardless of the current circumstances. It's one thing I miss about Canada, and frankly Japan could use more of this.

--I didn't get a chance to spend an evening in a bar, meeting and talking to people. On a personal level this trip was a failure.
Posted by Rick at 11:35 PM