As some of you may have guessed from recent posts, I recently attended an airshow. The JASDF (Japan Air Self-Defense Force) has an air base (Nyutabaru) just outside of Saito, and every year they host an air show. [Sorry, I couldn't find any direct, "primary" links to the base and/or the air show in either English or Japanese.] It's basically an "open house" sort of day at the base, and is good, clean fun for the whole family--hunks of metal and wire screaming through the air faster than the speed of sound, displays of weapons useful for killing, maiming, and blowing things up, a festive atmosphere, food and drink, and all manner of wholesome entertainment.

When video games just aren't enough, this is about as close as most of us (or at least most of us reading this) will ever get to jumping into the cockpit of a weapon of mass destruction, launching it through the sky at breakneck speeds, and raining death and terror on everything in our path, blasting the shit out of whatever we choose, free as the wind... [Sorry, I was starting to drool a bit...] 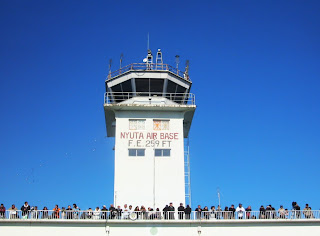 And seriously, I was drooling at the chance to get some really snazzy photos of fighter jets hurtling through the air and post them here on this ever-so-humble blog of mine. It was not to be, however. After about five minutes of shooting two things became painfully clear to me. In the first place, as high-tech and expensive as my camera is, it's not pro gear. The planes were too fast and too far away. Zoom in and get nothing but blue sky; zoom out and get something resembling a bird off in the distance. And secondly, I came to the harsh realization that it probably wouldn't matter what kind of gear I was using; this was a job a bit beyond my photographic abilities. 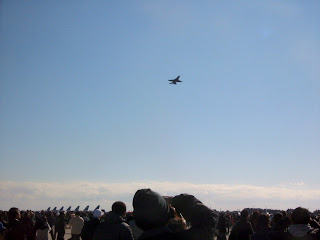 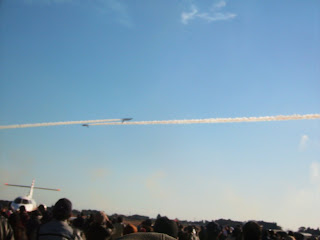 Bloody depressing. I had to console myself with a few somewhat serviceable shots of very cool, fast, exciting jet fighters, er, parked on the ground... 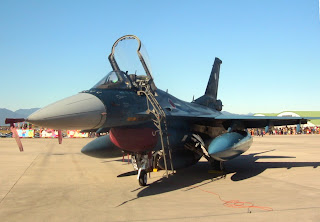 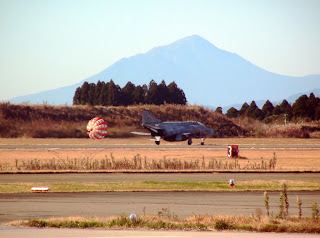 That's a nice view of Mt. Kirishima, though, don't you think?

Actually, I did manage to get a few half-decent (i.e. salvageable) shots of the Blue Impulse aerobatic demonstration team in action. I've already posted a few of them here, and I'll post a few more later.

But there's more to an air show than fighter jets, right? There were all kinds of flying machines at Nyutabaru! There were cargo/personnel carriers: 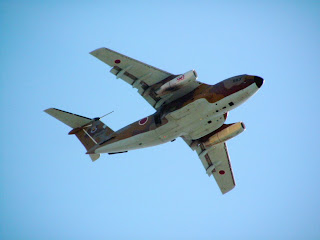 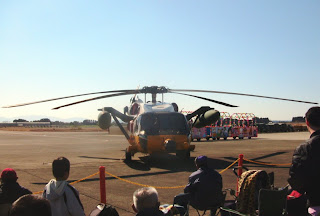 And even an old-style bi-plane: 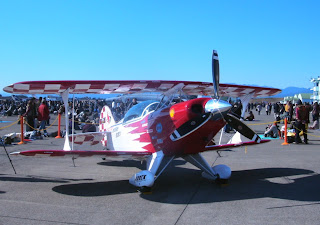 And lets not forget all the impressive weaponry that was on display. This is a machine gun that's normally attached to an airplane. I think someone said it fires about a trillion rounds per second... 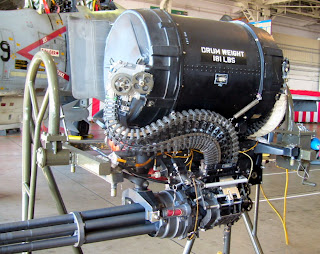 And what would a fighter plane be without missiles... 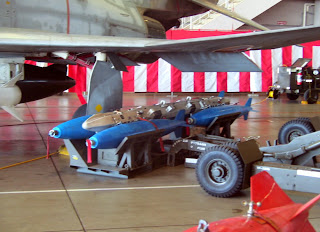 As far as these things go, I suppose the Nyutabaru Airshow is pretty small scale. That doesn't make it any less interesting and entertaining, though. Joking aside, I quite enjoy stuff like this. And even if you personally don't have a bloodthirsty, war-mongering demon lurking somewhere in the depths of your mind, it's always a good idea to learn about "the other half" that's hell-bent on your destruction, right? Yes, there's something for everyone at an event like this!
Posted by Rick at 5:10 PM